Results: The Skull at The Museum of Osteology

The Museum of Osteology, located in Oklahoma City, Oklahoma, is America’s first skeleton museum and has over 300 skeletons on display! You can read about how the specimen also known as the Starchild Skull was transported to the museum here.

“The Museum of Osteology, located in Oklahoma City, Oklahoma, is a unique educational experience. Focusing on the form and function of the skeletal system, this 7000 square ft. museum displays hundreds of skulls and skeletons from all corners of the world. Exhibits include adaptation, locomotion, classification and diversity of the vertebrate kingdom. The Museum of Osteology is the first of its kind in America.”

My first visit to this Museum was amazing, as I had not expected such a beautiful arrangement or perfectly displayed exhibits. From the moment you walk through the door, you know this place is different. 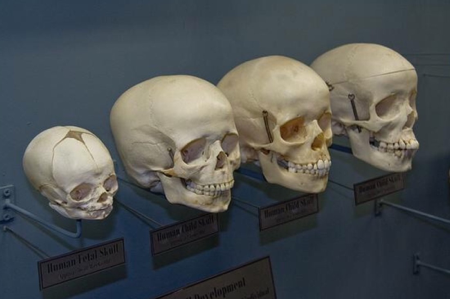 I was first introduced to the Museum as I was deeply involved with research and investigation into the “Elongated Skulls of Peru”. The Museum is also a learning place with specialists and accredited professionals that are accessible and ready to share their knowledge of bones, skulls, skeletons and articulation. It’s a science that I tapped into to learn as much as I could about skulls from “bone specialists”. That trip was well worth the miles from Georgia and I found their information to be not only very valuable but they also offer something you may not find anywhere else with full and unrestricted access…hundreds of skulls and comparison samples.

One of the first decisions I made in the investigation plan for the Star Child Skull was to revisit the Museum with a crew of Anthropologists, Paleontologists, and an Archeologist. As we gathered in the upstairs workroom, we discussed the Starchild Skull along with all the possibilities. The Museum hosts over 300 skeletons on display, but in the backroom, there are skulls and skeletons that number over the thousands. I knew exactly where we could get our hands on not only comparison samples, but to have the professionals weigh in on what is “truly” anomalous and what isn’t on the Starchild Skull. The different features are plain to see but can they be explained? Also, the Starchild Skull has been called: part primate, dog, and in one case, even a mole. My goal was to chip away at every accusation – even the silly “mole” diagnosis – since we were there! 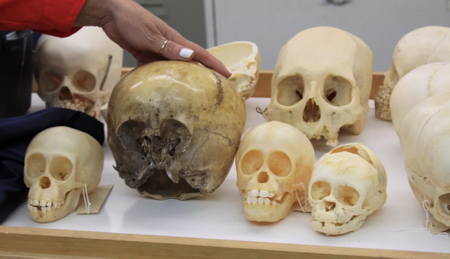 We revealed both the skulls that are the subject of this new investigation and placed them on a work bench and the examinations began immediately.

The first point everyone agreed upon was the “size” of the skull was for that of an average 5-year-old. This is where Melanie Young and myself started to list the claims about the thickness of the skull compared to the other skulls. The team of scientists and specialists, were a bit puzzled at first because they thought the thickness of both skulls were in line with, what they said earlier, an average 5-year-old. As we showed them the comparison pictures that are easily found all over the internet, and with the skulls side-by-side, they pointed out the Starchild Skull was being compared to an adult skull. THE Adult Skull found with it. “Of course the Starchild Skull appears thinner and different but compared to a skull of the same age, it’s normal.” The comparison skulls also offered another extremely valuable feature, the top of the skull had been cut and hinged on several of the normal comparison skulls giving us the chance to truly measure and see with our own eyes that the Star Child Skull was indeed, within “normal”. 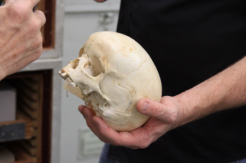 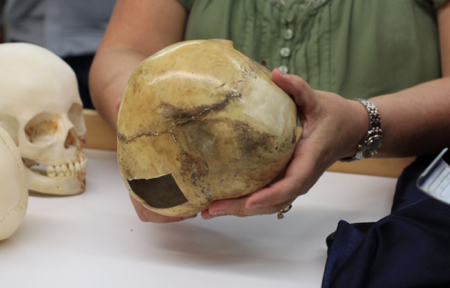 I sat back for a moment because they were right!!! This is when Joe started to pull many skulls, 5-7 years in age, to compare and examine. There was little to NO difference in the thickness nor the weight of the skulls compared to any others.

This brought up several new questions from me, such as: “Who determined or suspected that the Star Child Skull was older than 5 years?” and “Who, why, and what prompted this new theory into the age?” I ask because up until now, every professional and scientist that has picked up the skull has immediately said that this skull was that of a 5-year-old’s because of the size and thickness of the bone, including the room of those schooled, tested, and holding decades of experience. These questions, I will answer in full later, but for now, I am satisfied as we compared the Star Child Skull next to literally dozens of other skulls, and that the size and thickness of the skull are normal if…..this once-living being was indeed 5 years old at the time of his death.

The size and thickness of the bone was comparable to

The questions about the cradle boarding or cranial deformation were fully discussed as well as the other characteristics that are visible on the Starchild Skull, such as the Inca bones and wormian sutures. There is none of the obvious or usual sign of a manual manipulation, such as “band marks” or excessive flatness.

The external occipital protuberance or inion was the next topic discussed. The inion on the Star Child Skull is much lower in the back of the skull as on a normal skull. The significant consideration here is that the head is flattened in back and if the Star Child had very little mobility, the smaller, or atrophied muscles, would be expected and thus, could explain the widened occipital area. The theory of an inactive child was applied in the visit – as we see even in our modern times, this condition in infants and toddlers that spend too much time on their back which will indeed cause a “flattened” head. This of course, by no means explains the over-all shape and condition of the Starchild Skull, but does offer an explanation that must be considered, especially before further testing is done. A skull of a child with Down Syndrome was also useful in a comparison study, as this skull shape was closest to the shape of the Starchild Skull.

The eye socket region was confirmed with broken and missing edging which could indeed effect the depth ratios or measured features. If the broken pieces were added, how would this effect the measurements?

The ear region on the Star Child Skull are also much lower and the ear canal is “seemingly” larger than normal. This remains part of the mystery, but we will attempt to answer this with the genetic testing. 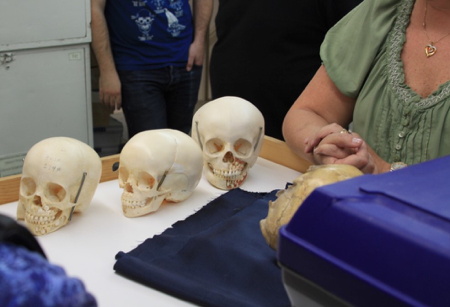 Every rational theory, explanation or suggestion is written down as we draw closer to the DNA and other testing in the “planning” stages or already-in-the-Lab-and-testing phase. This will include diseases that are now “testable”, and these tests will be done. Hydrocephaly is not a condition that can be genetically tested but there are many other diseases, such as Down Syndrome and Progeria, that can be tested. These factors must be ruled out before our reports are included in Peer Review.

The Starchild Skull has received inspections and examinations by the highest credentials. The skull is 900 years old. Of course, those that are schooled with years of experience in ancient discoveries, especially bones should be consulted! The scientific community has been so open and quite willing to help with their tools, equipment and expertise in partnership with this investigation. I owe a big Thank You! to the amazing staff at the Museum  of Osteology for not only all of the valuable time they shared, but the total and complete access to anything we needed or wanted to ask. The VIP tour was appreciated too! I also would like to thank a few people that were invited to join us as highly respected and very well known in their fields:

Bill and Julie May

All of whom have a solid background and experience with the Elongated Skulls of Peru and now the Starchild Skull.

Researcher/Investigator specializing in Forensics. Author and popular media guest with many Radio, lectures and TV appearances.

3 thoughts on “Results: The Skull at The Museum of Osteology”