How Do You Make a Replica of a 900 Year Old Anomalous Skull? 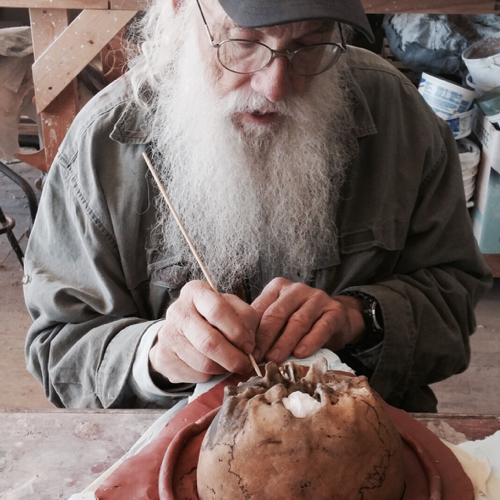 Chase and Melanie hit the road for the first step in an investigation plan to thoroughly examine and test what is commonly known as the “Starchild Skull”.

The first step was to designate a proper evidence identification to keep the skull as free from bias as possible for the new scientific professionals that will examine the skull. This Skull is known to this investigation team as:

The Skull is unique and of course, world-famous. There is a strong sentiment that is felt by those that see the skull or for those that have supported and followed news of it for years. It was clear that our first step was to protect and immortalize this skull as a “Museum & Photographic Quality” artifact. Some have asked why this was done first and my answer is this –  when I first laid eyes on the skull, I was struck immediately with a sense of sympathy. Regret, actually. I want this skull to have a resting place somewhere special and somewhere that people may still see the skull but to leave the travel and the “handling” behind. This also offers the world a chance to have an exact replica of their own. (visit www.mtblanco.com to purchase your own copy and investigate for yourself!) This skull, in my opinion, belongs to the world but it also deserves to rest as it was indeed, a once-live being here on planet earth! The samples needed for the analysis already planned were extracted before any modeling was done.

There was only one man with the experience and expertise to accomplish an exact model with every detail we demanded and this was Joe Taylor. Joe is the owner of the Mt. Blanco Fossil Museum in Crosbyton, Texas.

After an exhaustive examination, we were joined by Bill and Julie May, respected and experienced paleontologists. Bill took the needed archeology measurements and additional DNA samples. His precise and thorough inspection yielded a new discovery that we have not yet considered; the bottom of the Skull’s eye sockets are clearly broken and worn off. Both eye sockets. Does this change the depth analysis of the previous claims? The answer is yes. The bones are not “naturally shallow”. The breakage is clearly visible when any picture of the Starchild Skull is enlarged. 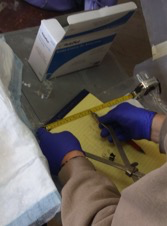 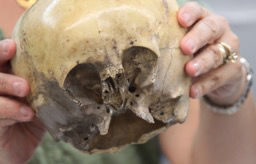 There was another key notation. The skull once had a nose. This was evident by the nasal suture still visible on the skull. Our discussion then was turned to; what other bones are clearly missing from an observable test. Of course there are many we could now see with an objective eye. These were not subjective observations but one’s made as we all realized; there is evidence still present on the skull that once held or connected the “missing bones”.

The skull once had a nose.

I had discovered the INCA Bones and wormian sutures upon first glance of the Star Child Skull but Joe also confirmed this during his examination. 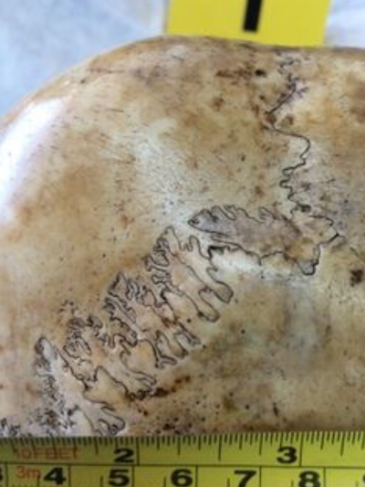 Joe and I are no strangers to the INCA bones, cranial deformation, elongated skulls or the wormian sutures, as we have examined many dozens skulls during our time and work in South America with the “Watcher’s Team” lead by LA Marzulli and Richard Shaw.

Joe was ready to start molding both skulls. This was a painstakingly long process as he was more than careful to not cause a single alteration or more breakage. The nasal area still has a few delicate and fragile bones.

Just as Taylor started the latex molds of the skull, an unusual level of humidity permeated the air delaying the drying time making it a real problem, and since the team was scheduled to have the skull examined at the Osteology Museum in Oklahoma City a few days later, Taylor had to accompany the team with the skull inside the still curing mold!  With just an hour till the meeting at the Osteology Museum, he had to carefully remove the latex mold from the skull in a hotel room! What did the cleaning crew make of the baby powder all over the floor and couch! Talcum powder is always used to immediately coat the newly exposed latex so that it will not stick to itself. As Taylor removed the mold, one of the team members dusted it with baby powder! As every mother knows, the powder doesn’t all stay on the baby.

The Museum quality replicas are extraordinary. They are picture perfect from the color deviations to the perfectly fragile nasal area. Every suture is visible and palpable as on the real skull. This expedition trip that started in Texas did indeed set a high bar.

Remember, if you want to study a skull for yourself to see these different anomalies, you can purchase them directly through the museum here. We receive nothing from the sale of these museum quality replicas.

Researcher/Investigator specializing in Forensics. Author and popular media guest with many Radio, lectures and TV appearances.

2 thoughts on “How Do You Make a Replica of a 900 Year Old Anomalous Skull?”